While browsing on the internet, I came across something unusual.

As you guys may or may not be aware, I went to the Paltalk Help Lobby to check if I had been hacked, because I was convinced my bobo577 nic had been hacked into and stolen.

However, I came across something strange.

I came across two images that were present on Answering Abraham (The link had been deleted).

It was really weird and these are the images: 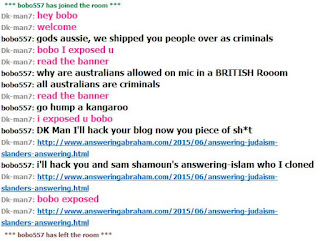 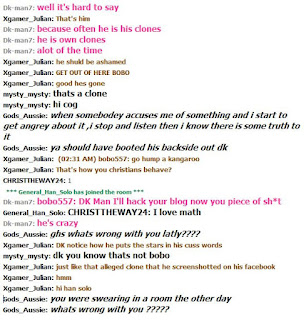 I was quite suspicious of the supposed claim that the nic was me, especially when mysty_mysty had said it was a clone and it turns out, It was so.

It would seem very odd for mysty to say it was a clone when my name was supposedly there. I had expressed concerns that I had been hacked and that there someone who hijacked my nic. I was told that there was a possibility that the text had been edited. As it turns out, it had been edited in a bid to frame me. Whoever edited it to claim it was me, I do not know and frankly, I do not care.

What matters is God has vindicated me of the lies about me.

What we have in front of us on this page is the original screenshot before it was edited. If this is so, I am glad I have proof of my innocence. However, it is worth being cautious in case there is a risk of having the bobo577 account being hacked again.

If you see anyone claiming to be me. Call them to the mic and test them. if they refuse, BOUNCE them. Engage in a conversation with them in the room when they get on the mic to test if it is a recording or actual person.

I praise YHWH of hosts for vindicating and answering me.

PS. The Paltalk Lobby didn't say that the text had been edited just to clarify. The images were also present in a Google image search despite the links removal.
Posted by Answering Judaism at 13:50

Answering Judaism
I am a young apologist and a Gentile. A Christian. I seek to demonstrate the truth of Jesus Christ to the Rabbinic Jews for them to consider the belief in him, respond to objections and strengthen believers to defend Jesus biblically from the scriptures. You can contact me on Paltalk by the following nics: bobo577 and Answering Judaism. If you wish to discuss something, I am happy to talk with you on Paltalk. The Answering Judaism nic I mostly use nowadays so that one you'll probably receive a reply from. If you give me a question and don't have an immediate answer, it may be an issue I need to look into.